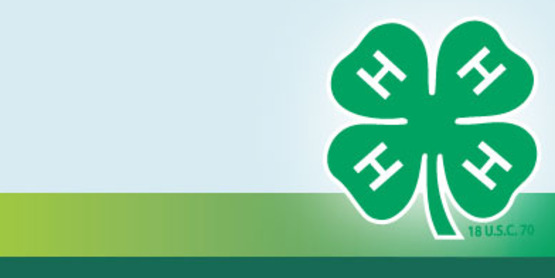 4-H: the name conjures up images of a Norman Rockwell painting depicting a county extension agent visiting the farm and inspecting a 4-H member’s animals. Over the years a decreasing farm population and the rapid growth of urban and suburban areas in New York State have had a major effect on the composition of 4-H clubs and their activities. As 4-H celebrates its 100th birthday this year, the purpose and values of 4-H have not changed however. A look at the history of the 4-H movement helps explain the commitment of those involved and illustrates why the program is still relevant today.

Nationally, 4-H celebrates its 100th birthday in 2002, but for Chemung County the roots go back much further. Rufus Stanley, who was appointed the county’s first club agent in 1919, was already organizing and influencing youth in 1886 with his Photographic Rambling Club. The Ramblers evolved into the Omega Club at the turn of the century providing 11 and 12-year-old boys in Elmira with some of the skills associated with country life – woodworking, gardening and camping. Stanley did this through annual pilgrimages to the College of Agriculture at Cornell University and the Geneva Experiment Station. To further broaden their horizons and develop citizenship and leadership Stanley took the boys to the state and national capitals. Herman Halstead, one of the scores of boys in the Omega Club between 1883 and 1900, said the club helped many of the boys become outstanding members of the community.

Federal funding and the establishment of Cornell as New York State’s land-grant college in 1914 gave birth to Cooperative Extension. This opened the door for leaders appointed as county extension agents to continue the work of Boys’ and Girls’ Clubs, and by 1915, there were 317,601 enrolled 4-H Club members in 47 different states.

4-H clubs began as a means of training young people in agriculture and home management skills that demonstrated to the community the value of good farming practice. That purpose still grew to fit society’s needs. As early as World War I, 4-H Clubs temporarily abandoned their programming and devoted energy to raising food for the war effort. As the war ended pulling money and members away from 4-H, the program reorganized into a broader program including recreation, health education and community service activities.

Chemung County Agents since Stanley – including Ernest Grant, Glenn McMillan and Kermit Bossard – have continued to provide innovative 4-H Youth Development Leadership in Chemung County through Cornell Cooperative Extension. Robert Manchester, Pine City, has seen the benefits of his sons and grandchildren all growing up through 4-H. “I was a farm boy and had to work on Saturdays, so I wasn’t able to attend club meetings, but I have a deep feeling for 4-H,” he says. “I remember a 4-H Rally at Webb Mills. Mr. Grant was there. He was terrific. He had a way with kids you wouldn’t believe.” Manchester became a 4-H leader 40 years ago. There wasn’t a club in his area, so he and a good friend, Dick Nickerson, started one. He recalls one boy in the group who had trouble doing a 4-H public speaking presentation. “We got him steered around so he was talking about something he was interested in – rockets. It brought him out of his shell.”

Albert Hoefer, a State 4-H Club Leader in the 1940’s, said 4-H clubs were an important support for communities dealing with the great sacrifices of world war. He called on 4-H educators to be “champions of youth” in guiding their decisions and providing a “lifeline to which youth may cling in their return to normal living.”

By 1978 Hamilton County became the 57th county with a Cooperative Extension Association. Now all counties in the state have 4-H programs including the five boroughs in New York City. Programming continues to adjust to make the most effective educational contribution on behalf of youth. During the 1980’s there was a new emphasis on youth work – particularly substance abuse, teen pregnancy and the lack of people prepared for the work force.

“I have been a devoted member of 4-H for six years,” says Katie Columbine, Elmira. “The most annoying sentence we ever hear is ‘4-H? Isn’t that cows ‘n’ stuff?’ There is much more to the program than agriculture and farm animals, although that was how 4-H originated. There are no limits to what a club can be focused around.” Columbine has been a member of a performing arts 4-H Club for several years. The Backstage Kidz have taken their violence and substance abuse prevention shows to Summer Cohesion, county and state fairs and the Northeast Regional 4-H Volunteer Forum. Along the way the teens have run a DJ service and provided area middle school students with Shadows Dance Club.

“The 4-H Club program utilizes and trains adult volunteers to teach and mentor youth.” said Meachele Manchester, 4-H Youth Development Team Leader. “That model has been the pattern for successful youth programs for over 100 years. In the process they have taught youth to be leaders, to set and work for goals and to be actively involved in the community.”

Sandy Bonci, Erin, was a 4-H leader for 19 years. She says her daughters and their friends begged Bonci to be their 4-H leader after reading a book about a farm boy who was in 4-H and had a lot of fun in the program. She started a club with about eight members and leaned heavily on the local 4-H agents – Glenn McMillan, the agriculture agent, and Kathy Treat, the home economics agent. She says the structure of the 4-H office with fewer agents and a blending of programs is the biggest change over the years.

However, the purpose of 4-H is still as relevant today as it was 100 years ago. The four “H’s” stand for Head (educational commitment and achievement), Heart (responsive, caring relationships), Hands (civic and social responsibility), and Health (healthy lifestyles). Today’s 4-H program serves over 12,000 youth in Chemung County. There are 319 members in 35 organized 4-H clubs.

“The main value is still there,” Bonci says. “We are teaching the kids to be good, responsible adults.” Her two daughters have continued the tradition. One sat on a 4-H board because she wanted to give back what she had gotten out of the program. The other became a leader for Bonci’s grandson’s club, because she had so much fun in 4-H herself. “It’s where you make great friends. It’s been a good experience all around for my kids.”

“The program encourages new ideas, education and opportunity,” said Columbine. “The emphasis on family and community is apparent, and the outcome (in learning and community involvement) is priceless.”

Patrick Herman, Horseheads, has been involved in the 4-H Canine Capers Club since he was 12. He joined to become more active with his dog, but he gained social abilities including leadership, cooperation within a group, communication, and the confidence to be able to perform. “I didn’t want to leave the program when I became too old, because I enjoyed it so much. When I was asked to be a junior leader, I accepted. It’s a nice way to give back to the program.”

“4-H is a good organization. I’ve always been on a farm and know the benefits of rural living,” Manchester said. “4-H still has its rural basic values.”