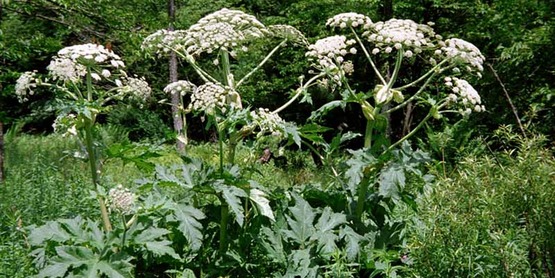 Image by Thomas B. Denholm, NJ Dept. of Agriculture, Bugwood.org

Giant hogweed ( Heracleum mantegazzianum) is one of New York's most striking and dangerous invasive plants. A member of the carrot or parsley family, it was originally from Eurasia, but was introduced to the United States and Canada in the early 1900s as an ornamental, for use in beekeeping and for the use of its seeds as a spice.  Since then it has spread outside of cultivation and established itself in areas around the country (see MAPS).

Giant hogweed is most easily identified by its size. It can grow to be 15 to 20 feet tall, with leaves up to 5 feet in width and stems up to 4 inches in diameter. The leaves are compound, lobed, and deeply notched, and the plant has numerous white flowers the form a large, umbrella-like head.The stem has purple blotches and stiff bristles. 1

Unlike many invasive species, Giant hogweed is a problem primarily because of the threat it poses to human health. While simply brushing against the plant is not harmful, when moist skin comes into contact with sap from crushed leaves, stems, roots, flowers, or seeds, and then is exposed to sunlight, severe irritation can occur over the course of several days. Skin becomes red and itchy, and burn-like lesions and large blisters form. These fade within days, but the area may remain sensitive to sunlight for years, and lesions and blisters may return, and scars or spots from hyper-pigmentation may last for years. Sap coming into contact with eyes can result in temporary or permanent blindness.

After contact with the plant, immediately wash with soap and water to remove sap, and avoid exposing the area to sunlight. If irritation begins, seek medical help immediately- topical steroids may decrease severity of reaction if taken early on. 1

Giant hogweed is also problematic because of its impact on native plants. It spreads and grows quickly, allowing it to grow densely in areas and outcompete slower growing plants. The dense canopy of the Hogweed then causes a disadvantage for plants that need full sunlight. This can reduce the diversity of native plants in an area, which affects wildlife. 1

Giant hogweed can be eliminated using manual, mechanical, or herbicidal methods, or a combination of several. These include root cutting, mowing, and the application of herbicides, and ongoing monitoring is important for any method. Descriptions of effective methods can be found on the NYS Department of Environmental Conservation's How to Control Giant Hogweed page.

Where is it found? 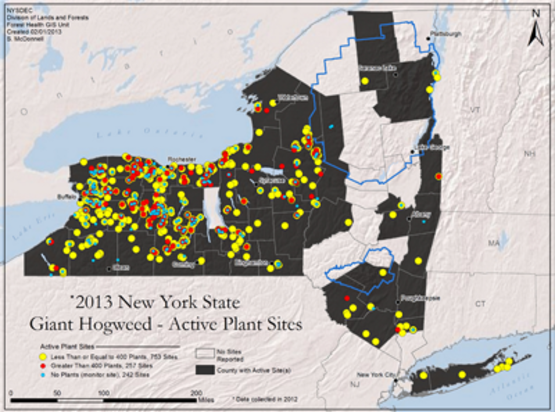 The USDA Natural Resources Convservation Service has mapped locations across the U.S. where Giant hogweed has been found. 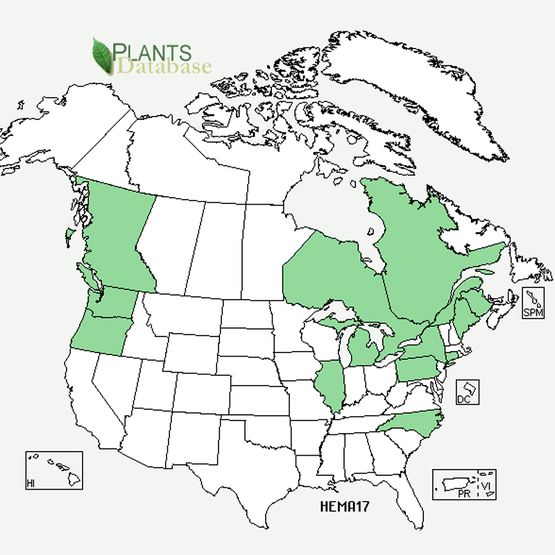 iMapInvasives is an online tool for invasive species reporting and data management.

There are no upcoming events

Giant Hogweed, New York State Dept. of Environmental Conservation Fact Sheet. Includes a statewide distribution map, how to report the presence of Giant Hogweed to the DEC, an identification key, and control methods.